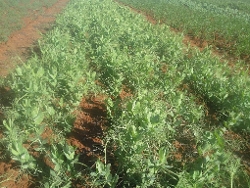 Most grain-growers recognise that they should be including broadleaf species in their cropping program to reduce disease incidence for cereals, control weeds, and to improve soil nitrogen fertility. However, the area sown to pulse legume crops or canola has dramatically declined in the past 8-10 years, and despite 65-70% of the grain in the southern region is still grown in rotation with pastures, many of these pastures tend to have low legume contents and provide little benefit to following crops (CSIRO, 2010).

The current alternative to cereals, poor performing volunteer annual grass dominant pastures, are havens for cereal pests and disease and often seen as having a negative impact on subsequent cereal yields and quality.

Introducing a broadleaf crop, either a pulse or an oilseed, can help spread market risk and can offer benefits in terms of disease and weed control, nutrient supply, water use efficiency and improving soil health and biology. Yet, selecting a break crop is not a simple task as many of these factors interact across the crop sequencing rotation.

This project intends to examine the productivity and financial implications of growing various varieties of legumes or brassicas, combinations of cereal-based systems and their impact on the environment and management. The project will re-evaluate the full significance of integrating broadleaf species in a cropping sequence. The core site has been established at Peter Stuckey’s farm; located approximately 30kms from Condobolin and is one of five (5) sites in the low rainfall areas which include: Chinkapook in Birchip district, Millewa (deep red sandy soil), Appila (moderately heavy red soils) and Minnipa (calcareous sandy loam). The data collected from these sites will provide a robust analysis of the economic and risk management options whilst adding a local flavour.

Materials and Methods
This project intends to examine the productivity and financial implications of growing legumes or brassicas in various varieties, environment and management combinations in cereal-based systems, to re-evaluate the full value of integrating broadleaf species in a cropping sequence

To achieve this, the project incorporates four approaches which when combined to develop a package will provide industry confidence in broad-leaf crops as components of risk minimisation cropping strategies:

An opportunistic combination of crops, cereals, canola, pulses and pastures, and crop sequences, based on soil and seasonal variables.
Integrating grain legume or oilseed varieties better suited to dry climates into crop sequences.
Growing crop or pasture mixtures such as a legume and an oilseed may increase benefits to subsequent cereals over that expected of component species, through enhanced nitrogen availability from the legume and enhanced root disease control by the oilseed. In addition, mixtures could have higher combined yields than component crops through more efficient partitioning of resources through space and time.
Multipurpose use of broad-leaf crops as grain, hay or forage based on seasonal and enterprise requirements.
The trial design has been developed to allow the rigorous comparison of up to 35 individual break sequences (unique combinations of break type and management options over 2 consecutive years) analysed spatially with a continuous cereal as a monitoring check. The table below shows a summary of the trial treatments and the end uses in 2011 and 2013

In addition, there is 4 large-paddock/commercial paddock scale comparison trials at Trundle (David Watt), Forbes (Tim Fay), Condobolin (Darren Leighton) and Lake Cargelligo (Derrick Davis). We do appreciate the effort, time and support from these farmers in ensuring that we achieve the objectives of this project as we learn together ways to improve grain production and farm profitability.

A successful conclusion to this project will result in more reliable and more productive low rainfall farming systems through the increased use of less risky broad leaved break phases. These breaks will increase subsequent cereal production, improve the economic impact of the break in those years of production and diversify farm incomes. Although more cereal crops will be replaced by break phases, the increased productivity of the cereals produced by the breaks will more than compensate for these replaced hectares. 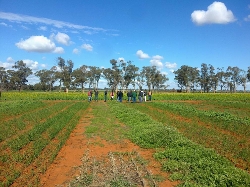 These will be achieved through the promotion of the following outputs from the proposal in low rainfall regions of south eastern Australia –
More reliable management strategies for the production of broad leaved phases.
Identification of more reliable break phase options.
Guidelines to identify trigger points for when, for how long and which break phases to use for improved farming systems outcomes.
Reliable estimation of risks with break phases as well as their total impacts on following cereal crops.