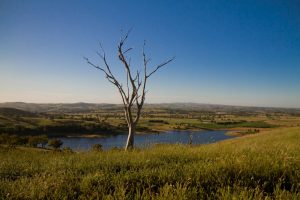 These farming systems include:

The CT represents a mixed farming system that uses conventional tillage with a pasture phase and grazing.

This system was set up to reflect what many growers in the region were using on their own properties. The crops in rotation on the system included long fallow wheat (LFW), short fallow wheat undersown with a pasture combination (SFWu/s) and a grazed pasture. The sown pasture contained annual medics and lucerne.

The RT represented another mixed farming system using a rotation of (LFW) long fallow wheat under sown with a pasture combination (LFWu/s), grazed pasture and a period of rest between wheat crops. During the rest period stubble was maintained and weeds were controlled by grazing and herbicide applications (in August). The sown pasture contained annual medics and lucerne.

Zero-till with no livestock (CC)

The CC represented a continuous cropping rotation that was dependent on herbicide application for weed control.

This farming system was divided in 12 equal segments and was rotationally grazed. Decisions regarding stocking rates and grazing pressure were made based on seasonal climatic conditions.

The pasture established in the PP system was a combination of lucerne, clover and medics. After an initial period of grazing, these treatments were only stocked periodically and the rotational treatments were not kept in place.

The results have shown that under continuous cropping systems even though there is an increase in soil organic carbon as well as plant available phosphorous the soil health will still decline due to a reduction in Ph as a consequence of the continuous cropping phases.

Therefore in order to maximise the amount of carbon stored within the soil without negatively impacting the soils health the zero till system with no livestock and the traditional farming system proved to be the most effective farming systems.

You can download the full paper by clicking the link below