To take a look at how soil carbon has influenced the microbial population I have decided to analyse a paper from Great Britain. The paper looks at two separate cropping systems (Continuous and rotational cropping) and they test how the microbes from these two separate systems react with to an introduction of soil carbon into the system.

Data Sourced from The department of soil biology 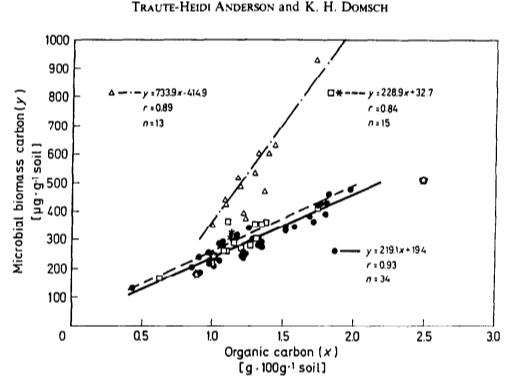 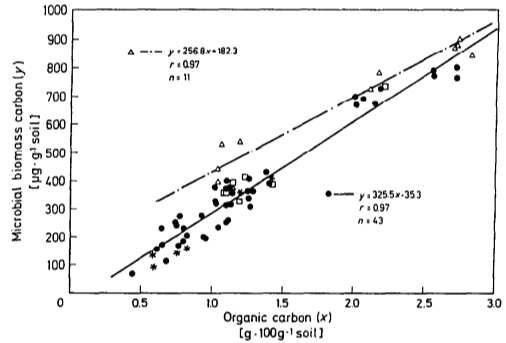 Fig. 2 & 3: Correlation between microbial-C and organic-C in soils under continuous cropping and  crop rotations.
Regression lines correspond to the following amendments:Black circle:mineral, Triangle:green manure Plots with a square
are not included in the regression. Sites I I and 25 are omitted because of their high
carbon contents, see text. 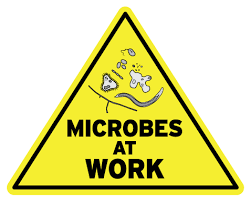 The microbial population within the rotational cropping system have evolved in a way that allows them to break down a variety of different types of organic carbon. Whereas the microbes within the continuous cropping system have only adapted to one type of carbon source. A good analogy for this scenario is bringing prime lambs onto a grain ration. If the lambs have been grazing pastures then the microbial population is optimised to break down fibrous plant material. So a sudden influx of grain may prove fatal to the animal. So when it comes to storing soil carbon it may prove beneficial to adopt mixed farming systems in order to provide a larger amount of diversity within the soil microbial population. 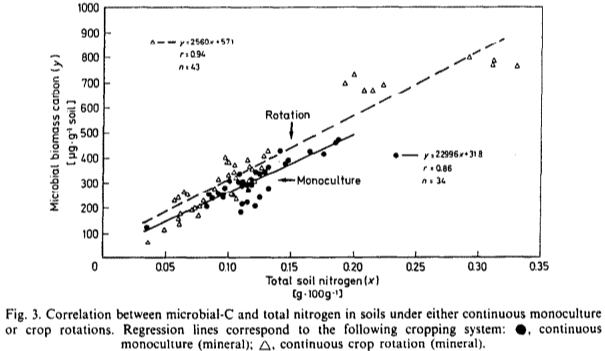 We have looked at how we can modify our farming systems so that we can maximise microbial biomass in the additions of soil carbon. Then again what do fat little microbes really mean for Australian farmers. To answer the question im going to refer to a nice little factsheet that was produced by the CSIRO. The CSIRO outlines two main benefits of increasing the microbial biomass of soils. The first benefit was that the soils were retaining 64% of the nitrogen additions against leaching. The second benefit is that the rate of mineralised nitrogen increased by 50% from 20kg/ha/year to 30kg/ha/year. So when it comes to nitrogen budgeting for your up and coming crops those fat little microbes may prove to be one of your biggest allies.

Hopefully this information has proved helpfull and if you have any questions and quaries regarding the research than feel free to add them to the comments section below. Also for regular updates make sure you follow our facebook and twitter feeds.

This is an extension article produced for the action on the ground project. Results depicted in this article have not been sourced from the project itself they are added for educational tools only. All information sources have been referenced accordingly.