Soil carbon in the past has been known for its nutrient properties but little did we know that there was a wide array of benefits that are derived from soil carbon. So to kick things off we will check out a handy piece of research done by the GRDC. 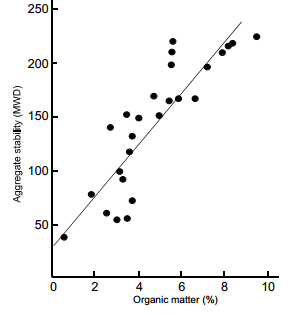 Figure 1: Relationship between aggregate stability and organic matter content for 26 soils (redrawn from
Chaney and Swift, 1984).

What you can see above is an image of a VAM hyphae that has produced spores. As you can see the hyphae produce a dense fibrous network and its this very network thats responsible for holding soil aggregates together. Also dont get nervous when you hear the word fungi because VAM is beneficial to your crops. These hyphae tap into the plant roots and begin to act as an extended root system for the plant. As these hyphaes spread throughout the soil they begin to source nutrients that the plant couldnt otherwise reach. So to put it simply it may be beneficial to adopt management practices that promotes the growth of these dense networks within the soil.

Transient binding agents include polysaccharides that are produced by microbial activity and the secretions by roots called root exudates. It has been proven that the additions of plant and animal residues will likely increase the production of plant polysaccharides although it should be noted that even though there may be an abundance of polysaccharides binding soils together these polysaccharides are also broken down at a rapid rate within soils. You could think of soil microbes as small children they are always in search of a sugar source and these polysachrides are the equivalent to finding a cookie jar so its understandable why they dont last long within the soils. Although they are worth noting as they do contribute a great deal to aggregate formation.

The persistent binding agents mostly consist of metal-OM, which is sourced from resistant fragments of roots, hyphae and bacterial cells. Organic material is quite often stabilised by metals such as aluminium and iron. These structures aren’t normally affected by management practices.

Hopefully that sums up the structural benefits of soil organic carbon and how your management practices will influence these structures. If you have any questions feel free to add them to the comments section below and CWFS now has a twitter profile as well as a facebook profile so feel free to follow our updates from there.